Well 2017, it was an adventure but I am ready to move on! I thought it would be interesting to choose four words last year: Fierce, Fueled, Fun, and Fulfilled. In reflecting, I excelled in being fierce and fueled, but came up short on being fun and fulfilled. I showed great ferocity in all the change that came in 2017 for sure. I survived building a house and moving, and changing jobs in 2017. Both took a fierce spirit for sure. I was fueled in my desire to make it all work out, and that I did, but as a result I wasn’t nearly as fun! What I was… exhausted, which I feel is quite the opposite of fulfilled. So I think I hit about 50% of my 2017 goal, which based on the year, is not too shabby. 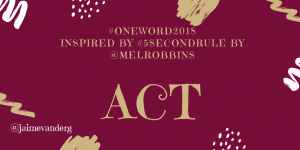 et’s just get back to the basics. My #OneWord2018 is ACT. Three simple letters that were inspired by a TedTalk I watched that led me to more and more videos by @MelRobbins. I was captivated by the message behind her #5SecondRule and the neuroscience behind it all. If you know me, you know I am a highly motivated individual for the most part. I am a real go-getter usually, but last year I lost that spark a bit. I didn’t do many of the things that I had in the past, and distanced myself from the things I had been so passionate about for so long. So I guess you could say I got a little lost. So one night I stumbled upon Mel Robbin’s TED Talk, and I loved how she tied brain research into behavior, and I was hooked. I will let you do your research here.. but research you should do!

So 2018 – I will ACT! I will move and shake and be sitting here a year from now a very different person.

Take a look at what hooked me on this path with this short video. This is what has led me to watch and learn more about this simple metacognition rule for success.